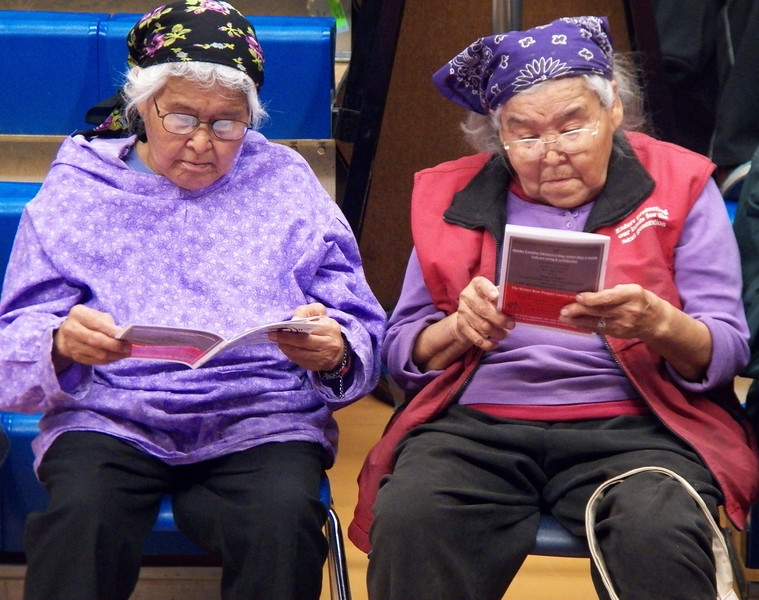 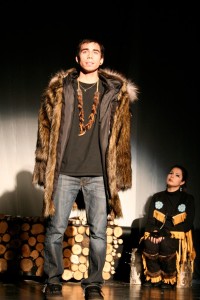 Andrew Dementieff (Duane) and Inger Berryman (Raven) in the 2011 production.

The Winter Bear is the story of Athabascan teenager, Duane “Shadow” David, who’s contemplating suicide when he’s sentenced to cut wood for Koyukon Athabascan elder Sidney Huntington. At first the two can’t even communicate, but they gradually find a shared language based on the old man’s hunting experience and the young man’s video game vocabulary. Together they construct a Bear Spear in the old, traditional way. Soon after, Duane is forced to kill a marauding Winter Bear using only the Spear. Sidney is wounded in the encounter so Duane, who’s deathly afraid of showing himself in any public way, must stand in the spotlight and speak for Sidney at the Alaska Federation of Natives Convention.

The story is fiction, although Sidney Huntington is a real person who’s mentored many young men in the course of his 100 years. Read more about Sidney here.

Photographer Richard Murphy took some great shots of an April 2016 performance of The Winter Bear in Nenana.

Background on The Winter Bear

In 2007, a group of young men in Fairbanks, disheartened by the suicides of many peers, formed a men’s group, Diigi Nai. They held alcohol and drug-free dances and concerts. Mark Frank came up with the idea of producing a play based on the life of Sidney Huntington, author of Shadows on the Koyukuk.

Matt Stevens secured a grant from First Alaskans Institute through Denakkanaaga Inc., an organization of Athabascan elders, to provide early college credit to students at Effie Kokrine Charter School, an Athabascan-focused charter school, for performing and staging the play. They hired Anne Hanley, a longtime admirer of Huntington’s book, to write the play, which was performed in May 2008, with 26-year-old Frank Yaska, Sidney’s great-grand nephew, playing the role of Sidney. 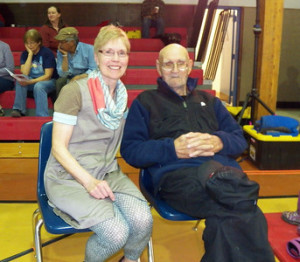 Hanley was not able to meet Huntington until after she’d finished the script. When she was finally able to get together with him at his cabin in Galena, she asked him about his 20 children. He pointed to their pictures on the wall behind him as he spoke. When he came to the picture of a handsome young man driving a dog team, he cried as he explained that that son had committed suicide. He pointed to two other sons who’d also committed suicide and told her how much he missed them and how he still grieved for them every day. Hanley received Huntington’s permission to share these painful memories and she revised the script to make it tackle some of the major causes that lead to suicide.

Since these formative years, The Winter Bear has gone on to perform for thousands of Alaskans.  Read about our production history here.

Brían Wescott and Andrew Dementieff perform a scene from Act II of The Winter Bear. From the 2011 production directed by Jayne Wenger.

In April, 2019 The Winter Bear toured to Nome, where playwright Anne Hanley was interviewed by KNOM radio’s Katie Kazmierski. You can listen to the interview on the KNOM website.

“We are who we are and we cannot be replaced.”